A couple of months after I moved into my house I cam home in the middle of a downpour to find the paint in my “mudroom” (I put that in quotes because it’s just a weird room that functions as a laundry room/mudroom/place where the cat stuff is) bubbling. This particular room is part of a one-story addition on the back of a two-story house, and the wall in question is the one that separates the original house from the addition. Water was getting in somewhere, and getting behind the paint. You could literally pop the bubble and water would come pouring out.

For months I looked for the source of this problem. The water only came in once in a while–clearly when the wind was blowing in a certain direction, and the rain was really bad. No one could figure out where it was getting in. At one point we even removed the siding to have a look. It didn’t look wet at all behind the siding. Finally I got someone up there with a hose, and we realized there was a small spot in the corner of a window where there was no caulk.

So we fixed it and I waited for months, though all kinds of weather conditions, to see if the problem was truly fixed. Then I fixed the wall. For a couple of years, everything was fine. Then it started again. This time I decided to skip the caulk and go straight to As-Seen-On TV methods and use Flex Seal. So far, so good.

Now it was time to fix the wall, and while I was at it…I’d finally paint the living/dining. 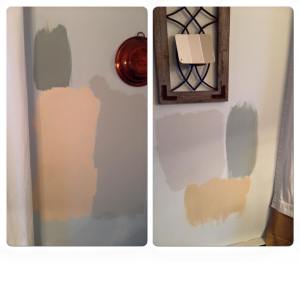 For many months I’ve been living with a variety of color samples on my walls. In fact–I ended up with at least one more added to the collection you see here.

I was pretty set on the darker greenish-gray color you see here. It’s Benjamin Moore’s “Beach Glass” but none of the visitors I harassed seemed to agree with me. So I pulled in the big guns–my grandmother. She’s got an eye for these kinds of things, and we have very similar styles (which is not something you can usually say about your grandmother).

She came over to take a look at my choices–and I was fully ready to end up heading back to the hardware store for more possibilities. But she instantly confirmed my gut-instinct. Beach Glass it was! (The Wickham Gray is nice too, but it’s just too trendy at the moment–I thought it would feel dated pretty quickly.)

Then I sat around for months without taking action. My dog needed to have some teeth removed, which put a strain on my finances. Then it got too damn hot to paint. As I stared down a September where all of my weekends were already spoken for I decided to just bite the bullet and get these projects done.

I started by fixing the back wall during the week. That involved retaping a drywall seam and then painting. I also had to fix a couple of cracks out in the living/dining room, so I made a whole evening of it.

Now you see it, now you don’t!

This may not seem exciting, but I’ve been wanting to do something else with this wall for a long time. It needs a storage solution, because, otherwise, it’s basically just a backdrop for cat bowls and a litterbox. (I’m thinking I might go to one of those construction materials recycling places and get some kitchen cabinets to throw up here, but I’m still pondering that one.

I spent a couple other evenings during the week taping off my many windows and baseboards, so that when I got up on Saturday morning I could eat, drink my tea, get to painting! When I first put the paint on the wall Saturday morning I nearly had a heart attack. It didn’t look anything like the sample. It was very gray, with a hint of brown. But as I pondered my predicament, I could see the edges of the paint begin to dry–turning much greener. I kept calm, and kept painting. 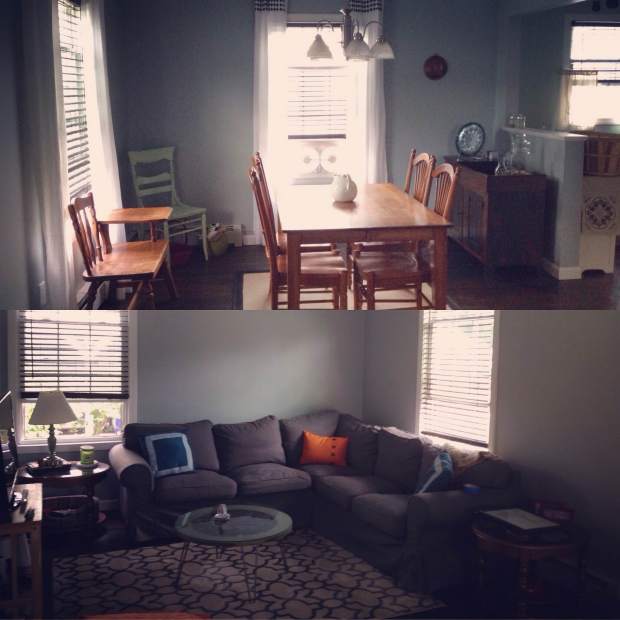 These pictures make it look very blue, but what I love about this color is how it changes throughout the day and according to what’s nearby. It can look blue, gray, or green–so it never gets boring. All in all, I spent about 8 hours painting on Saturday–with the help of my cousin–and then a few more hours cutting in along the ceiling and painting a small hallway on Sunday. And while I’m very satisfied with the color, it makes me want to put up crown molding (but I’m not ready to officially add that task to the William Morris list). I’ve got to get the mirror up on the wall over the couch, but I need to add hooks to the back of it first–so that’s a whole other project.