Apparently there is a new Pope, which is nice, but only because I am so sick of hearing about the Conclave and the lack of a Pope. I have never been less interested in a news story than I am in this one, in large part because it does not effect me… at all. 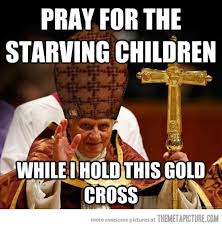 I honestly can’t imagine a story that has less to do with my life than whether or not there’s a Pope and who he is. I am not a Catholic. If I was a Catholic, I’d be a pretty awful one, going well beyond “lapsed” to straight up “heretic.” Whenever I hear a news report about someone standing watch outside the Vatican waiting for the smoke to change colors I wonder about them and their sanity. Do they have jobs? Bills to pay? Friends and family with real life problems?

What little religion I had in my life was of the WASPy variety; Congregational to be specific. It would be an understatement to say that I don’t understand Catholicism. Whenever I’ve been dragged to a Catholic Church I steer clear of communion, get annoyed by all the kneeling, and end up saying things like, “Hey what’s up?” and “Have a nice day!” when they’re all saying, “Peace be with you.” The past couple of Catholic weddings I’ve been to involved the bride and groom sitting down because the ceremonies are so long. (I think that’s a good sign it’s time to change the ceremony.) And I’ve got so many political and moral qualms with the Vatican and its cronies that I don’t even know where to begin.

But frankly, most of the Catholics I know won’t even be impacted by this. They’re just doing whatever they want anyway — which calls into question their actual Catholicism, but I think the Church will take what it can get.

Now I suppose we’ll have to hear about who the new Pope is for weeks to come, but at least there’s an end in sight, and NPR will go back to talking about nerdy things that I like, and not some old dude who has no bearing on most of our lives. The one thing we can hope for is some sort of new Hipster Pope who will stop telling women in Africa that its a sin to use condoms (even when not using one means almost certainly contracting HIV), and who will be all, “Let’s get married dudes, and while we’re at it, no more child abuse!”