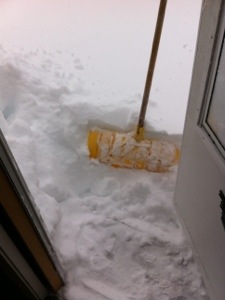 It’s been a big week here at my house. I started out the week getting the giant, terrifying pine trees behind my house taken down. It pains me to see a tree cut down. I am, after all, a bit of a tree hugger, but these things were a danger to themselves and others. For half the summer, my dog ends up looking diseased because I have to cut big patches of her fur out thanks to the sticky sap from the trees. Any furniture I put in the yard would be covered with the same sap, and then there were the needles… Oh the needles.

But that’s not enough reason to go to the trouble and expense of cutting down seven trees (three of which were absolutely huge, and the rest were more like weeds). But every time the wind blew branches came down. So far they’d missed the house, and anyone driving on the private road behind my house, but it was just a matter of time. I mean, the really big trees were probably damn near twice as tall as my house, and they were not pictures of health.